Introduction to Hop Diseases and Pests

This information on hop diseases and pests is intended to help identify common problems associated with growing hops. If detection is made in the early stages of growth, there is a better chance of developing a solution and reducing the effects of the problem on your harvest and increasing yield.

Please note that most of the pests and diseases have humuli in the Latin name. This means that they are specific problems on hops and do not infect or inhabit other plants. Therefore, if hops do not have a history of growing near your location, these problems will hopefully not exist in your area.

Don’t let the potential problems of growing hops stop you anymore than the potential of brewing a bad batch of beer. Mainly because of the higher heat used in drying commercial hops, the full aromatic potential may be somewhat diminished. Therefore, by using lower drying temperatures and hopefully organic growing conditions, homegrown hops are the best.

Good luck in your growing efforts!

These can be corrected by simply fertilizing the plants. Unhealthy plants become susceptible to attack by disease and insects. The first steps in reducing problems is the initial soil preparation, nutrient supplies and watering. 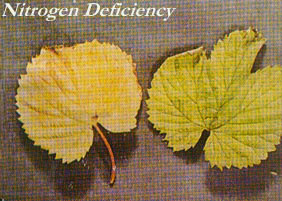 Symptoms include poor growth, stunting, and a general yellowing of plants.  Cones of nitrogen deficient plants are smaller than those with adequate nitrogen. Excessive nitrogen fertilization can increase the chance of disease and pests.  (Source: Field Guide for Integrated Pest Management in Hops) 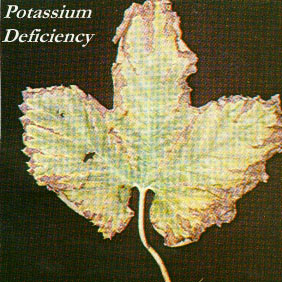 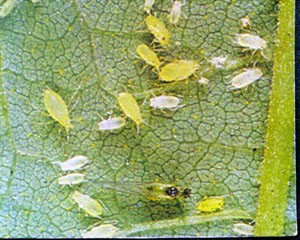 Insects can reproduce in large numbers very quickly. Your best defense is to check your plants daily or even twice daily, morning and evening, especially in the early stages of growth. Problems can be corrected and damage reduced if caught early.

A frequent pest on hops. It passes the winter as an egg on woody hosts of the genus Prunus (cherry, peach, plum). Winged aphids move to the top of the plant late in the spring. Aphid populations may build very rapidly and if left uncontrolled, may result in defoliation. Hop aphids eat more plant fluids than they can digest, so they expel the excess as a diluted solution called “honeydew” which makes the plant sticky and shiny.

Natural enemies – predator bugs such as lady beetles, minute pirate bugs, deraeocoris brevis, and damsel bugs – can provide some control when not disrupted by broad-spectrum insecticides.  Predator bugs are most common in late spring and summer.

Sometimes mother aphids carry embryos that are carrying their own embryos. This telescoping reproduction strategy results in quick population growth. 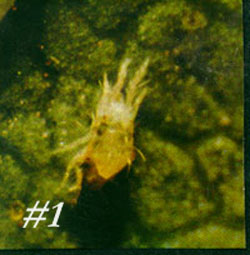 Mobile Adult A serious pest of hops grown in the warm interior valleys of the northwestern United States. 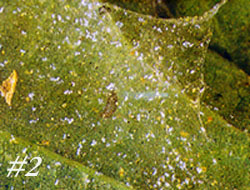 Mite Webs (#2) Part of the reason mites are difficult to control is due to the webbing. Mite webs protect eggs and mobile mites from contact by sprays. Webbing is usually confined to the main interveinal areas of the underside of the leaf. 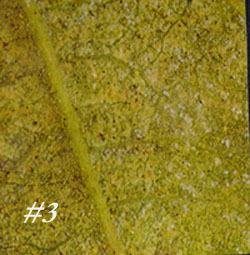 Mite Damage (#3) Mites damage hop leaves by inserting needle-like mouth parts into plant cells and pumping out the contents. Injury appears as light colored spotting. Such feeding injury is an early clue in detecting an infestation of mites.

Control options vary with the intensity of the infestation. Removal by hand, pulling the leaves off and destroying them, or using a hose to knock them off with water are the least invasive measures.

Or, you can use deterrents like pepper sprays or garlic sprays. Planting borders of flowers such as African marigold, nasturtiums and garlic plants will help deter the numbers in the early stages of growth.

Organic insecticides such as Pyrethrum, insecticidal soap, nicotine and diatomaceous earth work well if effectively applied. Some success can be derived via the introduction of ladybugs and lacewing predator insects as long as the predators decide to stay on the hops.

But if the infestation has gone unchecked, when discovered, using commercial insecticides such as diazinon or malathion sprays may be your only option to try and save the crop.

An ounce of prevention is worth a pound of hops. 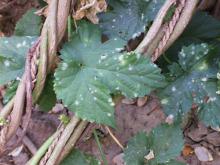 The fungus first appears as small, circular, powdery colonies on the leaves of hops (see photo). Young and rapidly growing tissue is very susceptible to infection by HPM. As the disease progresses, the colony size increases from about a sixteenth of an inch, to a half-inch or larger.

More colonies appear on the leaf surface and may eventually turn the leaf and occasionally the entire vine white. Infection of the female flower (or burr) is the most serious form of the disease. If the burr is infected early in its growth, the female flower or cone may not develop at all or may become deformed and brittle.

For susceptible varieties under severe disease pressure, yields can drop by 80% or more, even with the application of fungicides.

Small white colonies of HPM on the commercial variety Galena mark the beginning of infection (inside the three circles). These colonies will enlarge and produce more spores that can spread to other young leaves and cones and eventually turn entire leaves white with their powdery mass.

For a more detailed description of Hop Powdery Mildew, see the PNW Plant Disease Management Handbook entry for the disease.

Downy Mildew first appears in spring on new shoots that are called “basal spikes” which  are stunted and have brittle, downward curled leaves. A distinctive yellowing beginning at the center of affected leaves may be present on newly infected shoots. Angular spores (sporangia) looking purple to black, develop on the undersides of infected leaves

The root and crown tissue will have reddish-brown flecks and streaks. This should not be confused with normal reddish tissue found in the center of hop roots and crowns. 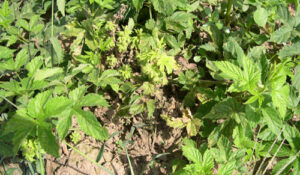 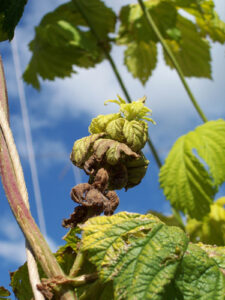 An example of alateral brand with downy mildew 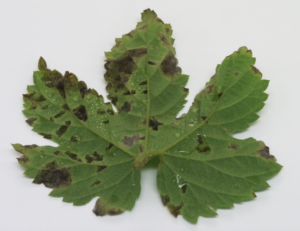 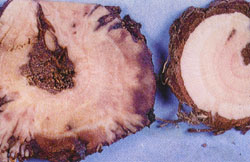 See the Downy Mildew entry in the PNW Plant Disease Management Handbook and in Field Guide for Integrated Pest Management for more on this disease.

Control Options for the Mildews

The use of Cocide (a copper-based fungicide) or sulfur are two possible solutions for controlling powdery & downy mildews.

Black root rot develops from standing water due to poor drainage, high water tables or over-watering. Infected roots and crowns look water-soaked and blackened with a distinct boundary between sick and healthy areas.  In advanced cases, the leaves turn black and stay attached to the bine. 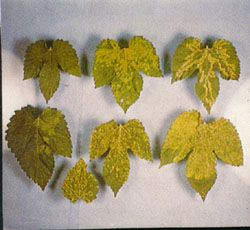 Examples of leaves with virus

Hops can host several viruses and viroids that can impact outcomes by reducing yield, quality, and/or plant longevity. The three to watch for are American hop latent virus, Hop latent virus, and Hop mosaic virus.

Frequently, mixed infections of multiple viruses and viroids can be found in a single plant. Over time, because of propagation methods as well as how hops grow perennially, the pathogens could accumulate.

It is not always easy to know if your hops have a virus or viroid.  There may be no symptoms, subtle hints or obvious traits.